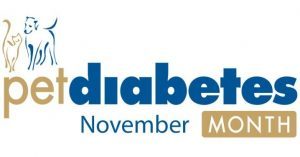 Frederick here with a super important finding coming at you! It’s November so what’s the first thing that comes to mind? Obviously is booking our pet’s stay out our Doggie Daycare for your holiday festivities, but did deeper than that. The next thought is Thanksgiving right? Well even though it’s baffling I, the food connoisseur, am not talking about this food filled holiday of thoughtfulness and giving. I’m talking about the fact that November is National Pet Diabetes Month.

It effects dogs just like it can humans. Diabetes Mellitus is a diseased state by which the body suffers from either an absolute shortage of insulin (Type 1), or from an incorrect response from the cells to the insulin that is being produced, a condition termed insulin resistance (Type II). Either one of these conditions will prevent the muscles and organs from converting the glucose to energy. That simply means there will be excessive amounts of glucose in the blood, a condition known as hyperglycemia. The hot topic issue here is the insulin. Insulin is a hormone that is produced by the pancreas. It is released into the cells in response to the digestive conversion of proteins into glucose in the bloodstream.

Diabetes is a common condition for humans, but it is also common for domestic animals like dogs. The most severe form is Type I. This form is dependent on daily injections for maintaining the blood sugar balance. This is called insulin Dependent diabetes mellitus.

There is also the development of Diabetic Ketoacidosis (DKA). It’s the metabolic acidosis caused by the breakdown of fat and proteins in the liver in response to insulin deficiency

Diabetes mellitus is caused be a plethora of things, but genetic predisposition is one likely cause.  Dogs that have diabetes often have relatives that have diabetes. It’s also thought that pets going through Hormone therapies could get diabetes as dogs receiving drugs to control their heat cycles are at a higher risk for developing the condition as well. Problems with the pancreas/insulin production are also a cause so Pancreatitis can be a factor as well.

Breeds that are at a higher risk:

Your veterinarian will be monitoring and recording your pets every symptom and will run a battery of tests such as a complete blood count, chemical profile, and a urinalysis. These test alone should be enough to diagnose diabetes and start the initial treatment.

Typically with the disease there is usually a high concentration of glucose in the blood and urine. Abnormally high levels of liver enzymes and electrolytes imbalances are also common. High levels of ketone bodies can be present in the urine. Ketones are water-soluble compounds produced as a by-product of fatty acid metabolism in the liver and kidney.

The Veterinarian will prescribe treatment that will include adding daily exercise into your pets schedule. Balancing your dog’s food and liquid cravings to healthy levels and lowering the insulin demand are the first priority. Obesity is a risk factor and makes management of the condition a lot harder, but it can be brought under control, slowly with great care and attention to detail. A diet will need to be strictly enforced. If necessary the Doctor can prescribe a diet specifically formulated for diabetic pets. Lastly, insulin therapy will be used to regulate your dog’s glucose levels. You will be given an initial insulin dosage will be taught how to give it to you pet. Most pets need it twice a day, but sometimes it’s only a once a day dosage. You can be taught to check the blood glucose levels at home with a glucometer, and the doctor will be bringing you in to recheck the blood glucose levels and how your pet is doing.

The doctor will also teach you the symptoms to monitor for if your pet goes into hypoglycemia (Low levels of glucose) or hyperglycemia (high levels of glucose) Keeping a log of your dog’s diet, behaviors, insulin dosing and times will help you manage the condition.

See this month is for more than just turkey. We need to raise awareness for this disease that causes a lot of hurt for people and pets daily. If you suspect this condition take your pet to be examined immediately. Don’t risk it, knowledge is power and early detection makes things more manageable.

Have a good day all!